New research could revolutionize how we treat chronic lung disease 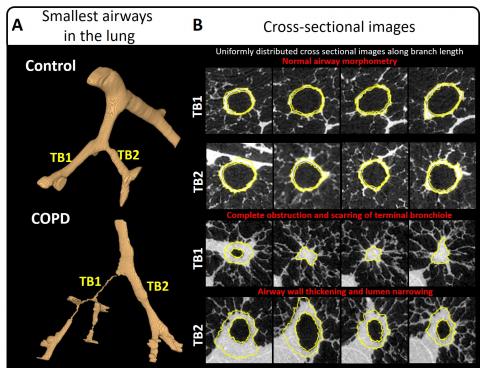 Scientists have discovered a new way to identify people at risk of chronic obstructive pulmonary disease (COPD). This significant finding could lead to earlier detection of the progressive lung disease and ultimately transform how patients are treated.

In a recent study published in the American Journal of Respiratory and Critical Care Medicine, researchers from the Centre for Heart Lung Innovation (HLI) at St. Paul’s Hospital, in collaboration with clinicians at the University of Michigan and Temple University, discovered a novel non-invasive imaging biological marker, or “biomarker,” that detects damage to the small airways.

Principal author Dr. Dragoş Vasilescu, a research associate at the HLI, analyzed lung samples from COPD patients who had received a lung transplant and validated that a clinically available CT imaging biomarker can detect small airways disease. To do this, Dr. Vasilescu used his expertise in ultra-high-resolution micro CT imaging, and one of three specialized micro CT scanners available in Canada at the HLI, and funded by the St. Paul’s Foundation.

“It is our hope that this novel imaging biomarker will provide a way to accurately identify patients who are most likely to progress to symptomatic lung disease before they can be diagnosed with COPD using traditional methods such as pulmonary function tests. This will ensure earlier and more effective treatment for the patients,” said Dr. Vasilescu.

COPD affects more than two million Canadians and is a leading cause of death and hospital admissions in B.C. and Canada. The progressive disease slowly damages the tissues of the lungs and causes increasing breathlessness. Scientists know now that once airways are damaged, the condition is irreversible and will generally continue to progress, even for those who quit smoking. Current treatments for COPD are mostly focused on relieving symptoms by dilating constricted airways or treating inflammation, but nothing is designed to reverse the disease responsible for the airway obstructions.

More than 50 years ago, Canadians working at McGill University in Montreal were the first to show that the major site of airflow obstruction in COPD is located in the small airways in the lung. Last year, researchers at the HLI, led by Dr. Tillie-Louise Hackett, published a study in The Lancet Respiratory Medicine that found the small airways deep within the lungs are destroyed before any clinical symptoms or abnormalities can be observed. That’s why early detection of airway abnormalities using such imaging biomarkers is key for successful treatment of COPD.