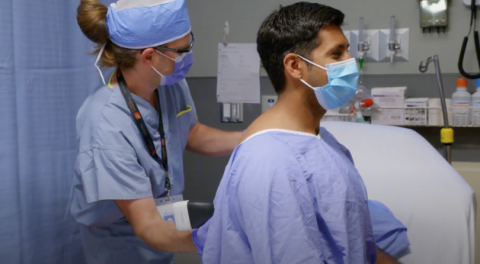 At St. Paul’s Hospital, home to one of the busiest emergency departments in the province, the sickest patients can get access to detailed diagnostic tests around the clock. But that hasn’t been the same in rural areas. Until now.

As part of a Digital Technology Supercluster pilot project to help diagnose COVID-19 faster, led by St. Paul’s emergency physician Dr. Oron Frenkel, fifty handheld ultrasound scanners are being distributed to physicians in rural areas around the province. Another 32 scanners will be distributed to hospitals and urgent care clinics in the Lower Mainland.

The scanners, provided by Burnaby-based Clarius, are completely wireless and send images directly to a smart device. They can be used to look inside the human body and help diagnose conditions in almost every part of the body. They have often been lightheartedly compared to the Star Trek tricorder, a futuristic device that could scan the entire body.

“Nothing has been this disruptive since the invention of the stethoscope, which was two hundred years ago,” explains Dr. Frenkel.